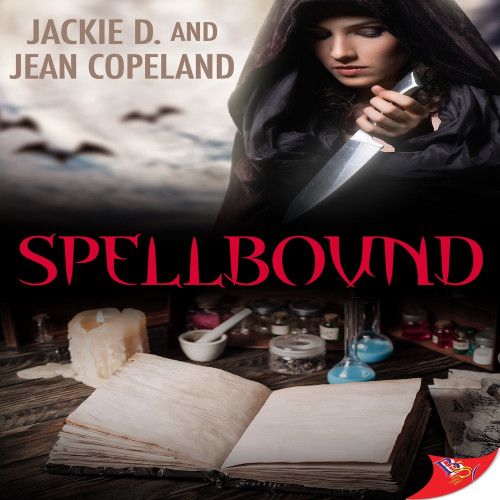 Jackie D and Jean Copeland on the magic of co-writing Spellbound:

Co-writing a novel was an experience hard to liken to anything else I’ve experienced. When Jackie D pitched me the idea for Spellbound, I said yes right away, not only because I’m obsessed with the Salem Witch Trials but also because it was Jackie D asking. If you don’t already know this, she’s an amazing writer of action/intrigue novels. She’s also an amazing friend. So although I’d never co-written with anyone or even written in this genre, agreeing to the project was a no-brainer.

When we started brainstorming ideas and then drafting chapters, it felt like we were Lewis and Clark, a team of explorers excited about scouting this uncharted territory. Midway through, it began to feel we were more like Thelma and Louise, not sure where we were headed in this careening project we’d contractually committed to, but we held each other’s hands and braced for a possible drive off the cliff. Luckily, the second third of the manuscript that always haunts writers didn’t bedevil us for too long. By the end, we were Jean and Jackie, two friends, two authors incredibly proud of the work we produced together, and forever grateful for our shared experience.

In keeping with our co-writing theme, we co-interviewed each other in anticipation of Spellbound’s release, and we hope you enjoy the results!

Jean: Describe your experience writing in a brand new genre.

Jackie: I love the challenge and excitement of writing in a new genre. I think it pushes your limits as a writer and forces you to think outside your normal box. It also introduces you to a whole host of new character possibilities and situations. We wanted to write something fun, exciting, and (at times) funny. I think we accomplished that while still staying within the parameters of the genre.

JC: What made you choose this genre?

JD: It is a genre I always wanted to write in because I enjoy reading it. I’m a huge fan of the unknown and the realm of the what-ifs. Dipping my proverbial toe into the dark waters of paranormal writing has always been on my list of that would be a lot of fun to write about. After reading The Second Wave, I knew I wanted to write with you. Your subtle and not so subtle humor, and the way you craft dialogue, were things I really wanted to work with in a story.

JC: What do you think about the process of co-writing? Did it match what you’d imagined starting out?

JD: Writing with you was even more fun than I thought it would be. You’re funny, smart, articulate, and a master of dialogue. It far exceeded any expectations that I had, and I hope to work with you again in the future. I can’t count how many times I said, “Jean is a damn treasure.” Honestly, I thought the process would be a bit more daunting than it turned out to be. We work well together, and I’m grateful for that. It’s difficult to work on projects when you don’t get along with the others assigned. But that wasn’t the case at all. I had a great time and would do it again in a heartbeat.

JC: What was your favorite part of the co-writing process?

JD: Having the opportunity to develop a storyline with another person is very exciting. You’re so creative and an excellent collaborator. We shared the same vision for the characters throughout the entirety of the project, which was helpful. You also never shied away from a story change or adjustment. If a new idea would come to you or me, we would just jump in and try to make it work. It was a lot of fun to work with someone who had a shared excitement for a project. I think that really comes through on the page. You can tell how much we both enjoyed writing this story, and our affinity for the characters.

JC: If you had to compare us as a writing team to a famous female buddy duo, who would it be?

JD: This is a great question, and I’m actually a little pissed I didn’t think of it first. I would say we’re kind of like Ashburn and Mullins from The Heat. We didn’t have all the angst or issues they started with, but we complement each other, are good at our jobs, and got the bad guy at the end of the day. Sprinkle in some snark, alcohol, and self-awareness, and you get Spellbound. Maybe we should write a buddy cop novel next.

JC: Did you temporarily fall in love with any of our characters?

JD: Sure! I think you have to, at least a little. There is a special place in my heart for all my characters, but in this particular story, it was disproportionately Hazel. She had her life turned upside down, found out things about her family and history she never knew, and was thrust into a world she never knew existed. She took all of this in stride and accepted reality for what it was. I think there is something beautiful in that type of strength. She knew what she wanted and what she stood for, and no one was going to make her falter—not even Morgan le Fey.

JC: Which famous witch would you have a one-nighter with? (Provided you were single, of course)

JD: Jane Spofford, from The Witches of Eastwick…obviously. There’s just something about a young Susan Sarandon that is irresistible.

JC: Will you write in another new genre again? If so, which one?

JD: I’m not sure that I have many left to choose from. I’ve written in Military/Thriller, Contemporary Romance, Sci-Fi, and now paranormal. I truly love writing serial killers, so my next project will be a return to that. In fact,  it’s something that you, me, and Erin Zak are working on together. Let’s see how far we can push the boundaries for a few of our favorite secondary characters from our previous works.

Jackie: Which one of the characters would you trade places with for a day?

Jean: Morgan le Fay. The idea of possessing absolute power and being irresistibly sexy is quite enticing. I’d love to know what that would feel like. But I wouldn’t want to for more than a day because those things can also create more problems than they’re worth.

JD: If you had to create a specialty cocktail for Morgan, what would it be?

JC: It would be a martini, ice-blue in color, perhaps a blue-raspberry flavor, not too sweet, with a rim of sugar around the glass. But beware…it looks pretty, but too much of it will kick your ass!

JD: Did you have sympathy for any of the bad guys in the novel? If so, which one and why?

JC: I only have a tiny bit of sympathy for Dirk and Tammy Lee because they were raised by an evil, power-hungry sociopath. However, as adults they should deal with their wounded inner children and realize the consequences of their spectacular ignorance.

JD: Which of the characters would you want to be trapped on a desert island with?

JC: Definitely Raven. She’s a total MacGyver, so I’d have the best chance of survival with her. And she’s smoking hot, too, so there’s that...

JC: So many rewarding parts of co-writing with you! I got to talk to you regularly since we made writing a priority in both of our busy lives. Also, novel writing is usually a solitary experience, so it was nice to share each struggle and triumph throughout the drafting process. And I learned about writing action scenes from you and more about plot structure for action/adventure stories. I can’t say there was a difficult part to co-writing with you. I even secretly enjoyed fixing all your comma splices.

JD: If you had to choose one of the characters to run for president, which would it be and why?

JC: I’d have to endorse Raven. She has both the heart and stomach for such a dirty job. She’ll be tough when she needs to without denigrating others, and she has a proven track record that she can be trusted to accomplish any task with integrity.

JD: Which of the characters would you choose to date your best friend and why?

JC: Hazel, Sarah, or Ayotunde. They’ve all demonstrated they’re compassionate, devoted, and giving of themselves emotionally. They also have the most enviable moral compasses. I’d definitely trust any of them to treat my bestie right, although with Sarah and Ayotunde, you’d have to have a lot of patience helping them get up to speed on life in the twenty-first century. But I think they’d be worth it.

JD: What advice would you give to authors who are considering co-writing?

JC: I would strongly advise writers embarking on the type of co-writing project we did to have a good idea of your co-writer’s personality traits and work habits. Being a great writer is only half the battle. You have to be able to work and communicate honestly with your co-writer, and if you can’t, it will probably be a frustrating experience. I was lucky that not only are you a gifted writer, you’re also a brilliant, reasonable human with an excellent work ethic! 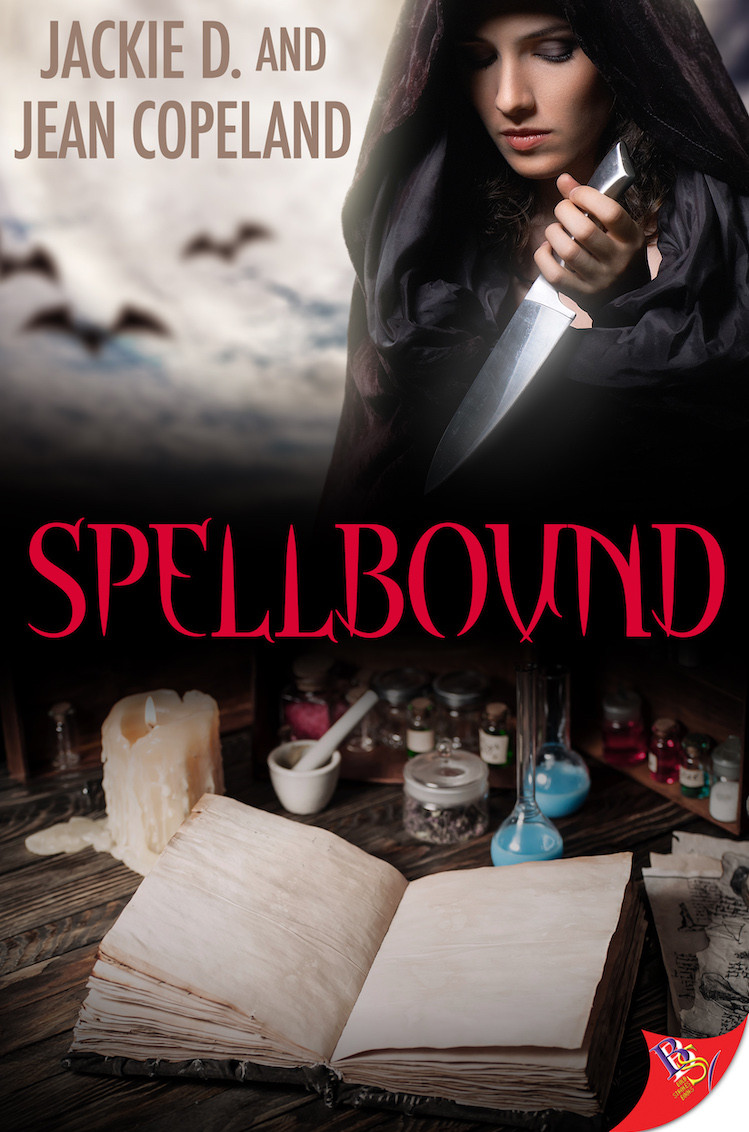